Morphology
Avileña-Negra Ibérica breed is a medium size breed with a marked sexual dimorphism. Its adult weight varies between 500 to 600 kilograms in the case of females and from 800 to 1000 kg in males. Is typical of this breed its uniform black coat being admitted white snout. Animals with this feature are scarce and considered an endangered breed variety.
Avileña-Negra Ibérica measurements, according to the Breed Association defined prototype, are summarized in the following table.

Breed prototype according to breed Association definition. 1977
Breed aptitudes
Nowadays is a beef specialized breed, producing high quality meat. Traditionally, Avileña-Negra Iberica animals were use for transport and agriculture labour as its main function, but meat production was also important. Milk production has been mainly a secondary use for familiar consumption. Although the first herds specialized in beef production appeared at the beginning of the past century, its use as a draught animal for agriculture labour has remained until the 70’s decade.

The animals settled in ancient times in the centre of the Iberian Peninsula evolved isolated dedicated to agriculture labour, being also important for meat production. Its meat products were already famous in Castilla Region in the XIV and XV centuries. In the past, animals where named based on its origin area: Avileño, Piedrahitense, Barqueño, Pinariego, Guadarmeño... gathered in two groups; the Serrana and the Avileña.
The "Serrana" (from the mountains) group was formed by the animals located in the Central mountain range. Its denomination was changed to "Negra Ibérica" to difference it from the cattle of most of the mountains of Spain, which were also called "serranas". At the beginning of the twenty century the Negra Ibérica started a regressive period. Meanwhile in the eastern part of the Iberian Mountains a group of animals began to stand out and formed, as the time passed by, the Avileña group.
The "Avileña" group of herds located in the mountains of Avila Province and neighbour areas resisted to the regressive process that affected the Negra-Ibérica group. It might be due to the higher breed purity of those herds and also to the existence of important herds managed in an extensive system that focused very early in meat production, developing and improving the breed features.
Due to the successful improvement of the Avileña group, it reached a high reputation in the area. It was widely used to improve "with it blood" many herds all over the neighbour areas, mainly to the Negra Ibérica herds. Consequently there was a homogenization of the two groups’ features. This similarity, together with the also similar exploitation systems and breeding objectives, caused, in 1980, the fusion of both groups in the Avileña-Negra Ibérica breed.

Although that the Avileña-Negra Ibérica cattle suffered an important regressive period during the first half of the twenty century, the exact numbers of this regression are not clearly known. According to the Agriculture Ministry census, at the end of this period, in 1978, there were approximately 80,000 suckler cows. Avileña and Negra Ibérica were still considered two breeds, so data are the sum of both censuses.
Eight years later, in 1986, there were approximately 90,000 suckler cows, and in the year 2007 the estimated census reached 115,000 suckler cows.
Yearly census data can be obtained from the breed Herd Book, maintained by the Breed Association. This Herd Book was created in 1978 and approximately gathered 16% of the total breed population. Due to the good performance of the association, since its foundation there has been a constant joining of new farmers. In 2007, the Breed Association was formed by approximately 34% of the total breed population. 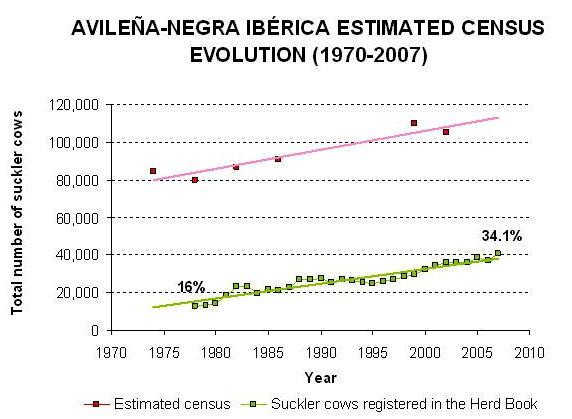 Avileña-Negra Ibérica development and improvement began at the beginning of the XX century near Avila where a group of farmers started to select cattle for its meat production characteristics. Breed development continued carried out by individual farmers and, as in the rest of the Spanish breeds, by the Agriculture Regional Authorities that selected and distributed the best animals and organized cattle markets.
In 1970, the Ministry of Agriculture created the herd books of the Avileña and the Negra Ibérica breeds. Both books were joined in 1980 to create the Avileña-Negra Ibérica Herd Book.
The Breed Association is created in 1971, and began to deal with the herd book in 1975. It has coordinated the animal performance recording and the genetic improvement programs, organized markets, meetings, breed promotion activities. It has collaborated with universities and research institutes, improving the knowledge on the breed and genetic improvement techniques. It has coordinated farmers to develop products and its marketing through the creation of common fattening buildings and common products distribution. In 1990, it created the Protected Geographical Indicator Label, the "Carne de Avila" and in 2000 a Breed Label. It has also joined many associations of endangered Autoctonous breeds, selected cattle breed, quality cattle breeds, etc.
Breed improvement programs have not only been implemented by the Breed Association but also by Regional Agriculture Authorities. Due to the breed wide geographical distribution many Technical Farms have had Avileña-Negra Ibérica herd in order to research on it, improve its genetic and production system and promote the products. Regional Authorities from Avila, La rioja, Cáceres, Madrid, Castilla y León and Castilla la Mancha regions are nowadays working on the breed. Many other regional technical farms have worked with the breed in the past as is the case of Extremadura, Toledo, Segovia, Ciudad Real, Albacete and Segovia.
The Breed Association has also worked with artificial insemination for genetic studies. A total of approximately 250 cows of around 30 herds have been inseminated since the beginning of the program. This program has revealed that the application of the technique in Avileña–Negra Ibérica is not easy since it use can increase the number of calves to two or three per birth causing problems.
Despite the fact that, Avileña–Negra Iberica breed has never been endangered, farmers have had to compete against intensive farming and it has not been an easy task. To facilitate this competition, agriculture authorities, besides the creation of technical farms and the support given to the Breed Association, have implemented different subsidies programs. From 1999 to 2007, the farmers from Madrid have received economic support within programs of conservation of autochthonous breeds as farmers from Castilla y León had from the same date to the year 2004. Also the Ministry of Agriculture has subsidized the purchase of Avileña-Negra Ibérica Animals for replacement. From this year, Avileña–Negra Iberica, as well as many other breeds, is going to receive a new subsidy that aims to boost environmental friendly cattle farmers systems.